Today, I want to offer you an article more sophisticated than usual, the first of new kind, an article dealing with heavy stuff, in short, an article that blows ass! 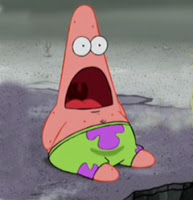 The concept discussed today is quite extensive, so I know that many of you, among my usual readers, will not necessarily be able to understand the entire article, which is why I will try to make it interesting even for neophytes. So if you are a sorcerer’s apprentice, be relentless, enjoy it, otherwise, you wan see it as a black magic trick, it’s beautiful, it’s powerful, but you don’t have to understand everything to appreciate it :)

This article is therefore the first of a small series dedicated to buffers overflow!

One last thing before we start….
A big shout out to Cyril Bresch who gave me the right to use some of his exercises for this introduction BOF. But especially thanks to him for introducing me to binary exploitation (Well, ok you were paid, but still! :D).
His personal website is hosted here: https://cyrilbresch.fr/

What comes next? Shellcodes, assembly, ret2libc, rop, and much more. None of these words mean anything to you? It’s normal, don’t worry, we’ll start easy with some context.

I will try a recursive definition: I start by defining the core of the subject, and every time a new term appears, I define it right after. This should, I hope, allow a fluid reading! :)

Small recipient in which we store pieces of information in a program. Most of the time, this buffer will contain chars, or a sequence of numbers, or whatever, anyway, they are bits stuck together that form bytes. Buffers are usually stored on the heap or in the stack.

Action that consists in exceeding the initial size of a buffer, thus affecting the values stored after said buffer. We as hackers are happy when a lot of very useful data can be found after the buffer. The most convenient case being to control the instruction pointer (a register), which tells which piece of code should be executed next. Be able do modity it, and you’re all done! There are many ways to perform an overflow, but also many protections in place.

“Well, I know what a program is, you click on it and it starts, how lame!”

Sure… But no really. You got the core idea, but most programs work in a command line interface, i.e. they are run by typing commands into a shell. Unlike with windows, where most of the time it is the extension of the file (.txt, .exe, …) that determines its type, with linux, it is rarely used, we got much better. The window’s way of doing so is itself a huge security flaw. More information about this kind of issue here: article_RTLO

What replaces this practice is the use of a magic number. It is a sequence of bytes that is put at the beginning of the file and which allows the system to know the type of file it is and version of it. Here, for an ELF, we see:

There are many types of processors, and each processor has its own set of instructions. Although standards are adopted by manufacturers, each processor retains its own particularities. A non-exhaustive list is available here: https://en.wikipedia.org/wiki/List_of_instruction_sets

x86 refers to the usual 32bits, and x86-64 to the 64 bits. This difference is due to the size of the registers used for addresses and operation management. A program x32 will work on both archs, but a x64 program will only work on a x64 machine.

Linux is not Unix. If you’re there, it’s never too late! In short, a large family of open source OS.

A shell is a command interpreter. Seen from afar, this is where hooded people type green lines of code on a black terminal. They exist on all OSes because it is necessary to communicate with the system this way. Attention, for each system, there are several implementations and versions.

The stack is a place used by the processor to store data. It is a LastInFirstOut file. In other words, the last element to be pushed is the first to be popped.

The heap also allows data to be stored, but in a more dynamic / flexible way. It is used (not exclusively) when the malloc functions (memory allocation during program execution) is called.

A series of assembly instructions starting (most of the time…) by booking space on the stack to process data locally, and ending with leave and ret to let the calling program resume at the initial calling state.

A series of assembler instructions that spawns a shell.

Well, take a break, take a deep breath, make yourself comfy in your chair…
And we’re going back!

We start by disabling the ASLR, it is a kernel parameter (kernel of the system, which manages almost everything) that indicates whether or not to place the different segments of a program at random addresses. Here, we will use the stack, so we don’t want it to move at all.

We will then compile the program so that:

We therefore use the following compilation line:

We will also need a few tools:

Okay, it needs an argument. What is done with it?

Let’s just pass it a long argument in order to make it crash!

Create the pattern (easily recognizable, that will be used to understand which registers are reachable by our input), then run the program with the pattern as parameter.

We see here that the crash occurs on the ret instruction (code section, small arrow on the left). 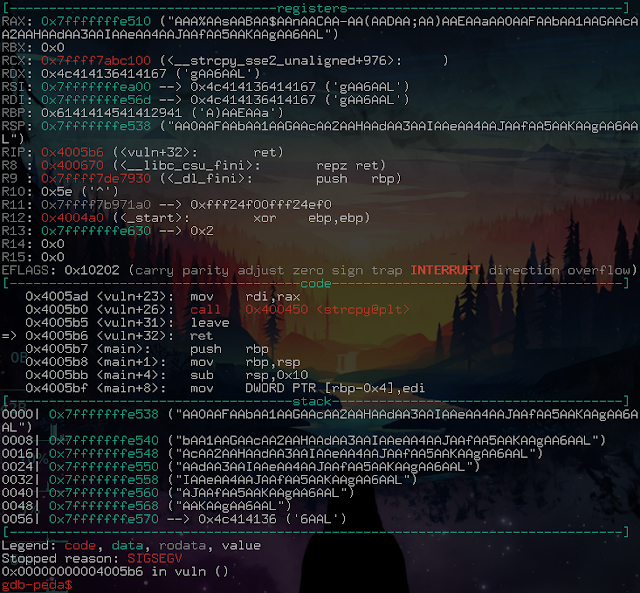 After the crash, we search the pattern in the memory:

The memory analysis has found pieces of our pattern in different places, so we see that the RSP (Registre Stack Pointer) is 40 bytes away from our input start.

But we already know that the crash occurs on a ret. Ret is an instruction that stores the last element of the stack in RIP (Instruction Pointer) to return to the main program in order to continue its execution. So controlling RSP before a ret means controlling RIP. Controlling RIP means being able to divert the execution flow of or target, and…

We do know where we are going to inject. What we now need a shellcode, a good one, a real one! :D

A quick tour on shellstorm or exploit-db, choose the right architecture, …

Here, the shellcode is homemade, because the general idea remains the same: Place the right parameters in the registers, then trigger a syscall so that the kernel executes what you want, here a shell.

We’re still going to disassemble it to understand what it does, thanks to this site: https://onlinedisassembler.com

This will execute /bin/sh using the execve syscall.

The parameters to use are found using this doc:
https://w3challs.com/syscalls/?arch=x86_64

Development of the exploit

We want to put our shellcode in a known place, then reach a size of 40 bytes to place the address of the shellcode to execute. Yapluka!

Our payload (data sent during the attack) will therefore have the following structure:
PADDING + SHELLCODE + SHELLCODE_ADDRESS

To find out where the data entered by the user is located, in gdb:

Disassemble the main (name convention for the main function of the program), define a breakpoint before the end of the execution, then run it with AAAA as a parameter. 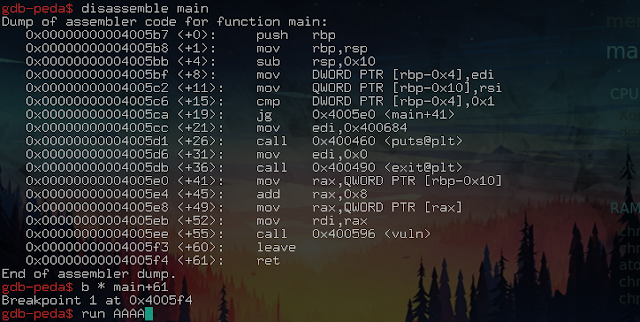 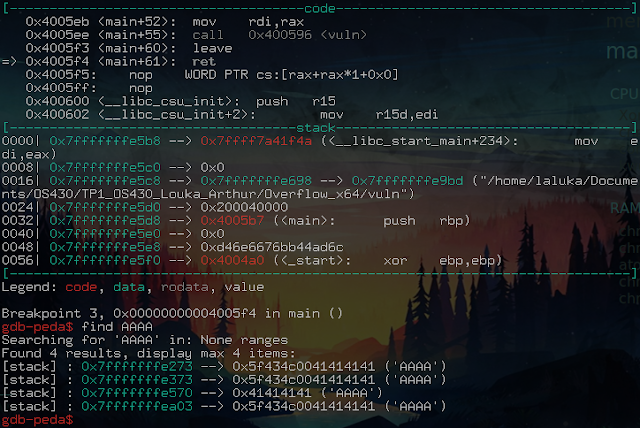 Once stopped, our input is in the stack, at the address: 0x7fffffffe570

And our shellcode will be a little farther, because of the padding.

Python code of the exploit:

To run the exploit, all you have to do is give its output to the program as an argument:

In this example, an error has been hidden, will you be able to find it?

This shellcode contains null-bytes (\x00, a sentinel which in C, refers to the end of a string) that are very poorly managed by bash. If the argument had been passed directly, bash would have cut it off. Going through a file allows you to send everything to the program, even null-bytes. But this does not solve the problem entirety. Indeed, the vulnerable function here is strcpy. It copies a string and stops at the first sentinel (i.e. null-byte, i.e. 0x00, i.e. ShellCodeBreakerOfDoom). Our exploit still works because they appear at the end or our payload as an address. And we paste this stack address on… A stack address, so the 0x00 are already present.

Thinking: How to fix the shellcode so that it no longer uses null-byte?

This example is limited because the size available before the EIP is very small. That’s enough for spawning a shell, but not for much more. In addition, since this space is close to the addresses used, it may be altered during execution. It’s annoying, isn’t it?

Reflection: How to use a shellcode of arbitrarily long size?

This example only works if the ASLR is disabled because it is highly dependent on the stack. There are many ways to bypass the ASLR… More in the next articles… Pwn-knowledge, one drop at a time! :D

Huh ? You read this far? Hatzoff, my friend! 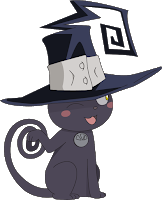 This being my first article on the subject, I know it will be incomplete, and full of inaccuracies if not errors. Feedback are welcome for typos, missing details, errors, … ^.^

-Use… Xor? Add? Sub? Other?
-Environmental variables? Order of the padding and shellcode in out payload?

I hope you appreciated this first step into the pwning world,